In a previous sharing, we showed how our network virtualization schemes have evolved in the past 7 years. At the end of that speech, we mentioned that we were evaluating some cloud-native solutions. This post serves as a successor of that sharing. We will update some recent progresses in the below.

To have a better understanding, let’s start from re-describing the problems and requirements we were facing.

As has been explained in the previous post, for some practical reasons, we extended our Neutron-based networking stack into supporting container platforms (Mesos, Kubernetes), thus we have one networking component simultaneously serving three platforms: 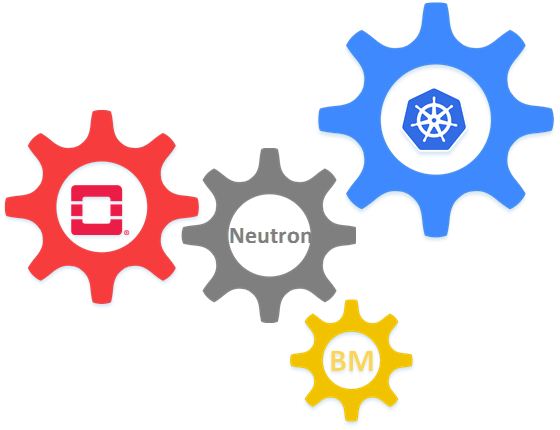 While this benefits a lot in the process of transforming from virtual machines to containers, it becomes a performance bottleneck when the cluster grows large, e.g. total instances (VM+Container+BM) exceed 40K. At such scale, allocating an IP address may take 10s or even more.

Although we’ve devoted much efforts into optimization, which have reduced the API response time by two orders of magnitude, the overall performance is still un-satisfactory, especially considering the expected cluster scale in the not far future. Essentially this is because, Neutron is a networking solution for virtual machine platform, which has a much smaller scale (in terms of instances) and is comfortable with seconds-level API responses.

To ultimately solve these problems, we have to re-examine the current problems and requirements.

After many times iterations of current problems reviewing as well as future needs clarification, we listed five critical problems/requirements of our networking:

Based on the above analysis, we started to survey and evaluate next generation networking solutions. Correspoinding to the questions above, our new solution should provide:

2.1 Mainstream networking solutions in the industry

Looking at some of the mainstream networking solutions in the past 10 years.

In 2010s, along with the concept of “Cloud Computing”, OpenStack quickly became the dominant virtualization platform in open source community. Along with this trend is its networking stack: Neutron+OVS based large layer 2 network.

There are two choices for cross-host networking in this large layer 2 network:

If you are using “provider network model” like us, you may encounter the above mentioned HW bottlenecks when the cluster is really large (e.g. 50K+ instances).

Container platforms get more and more popular since ~2005. K8s-native solutions such as Flannel and Calico evolves with this trend. Compared with the central IPAM model in OpenStack, container platforms favor local IPAM - one IPAM on each host.

But, this solutions suffers from severe performance issues when the cluster goes really large [1]. Essentially this is because those solutions are based on iptables, which is a chain design, thus has O(n) complexity, and it’s also hard to troubleshooting when there are tens thousands of iptables rules on each node.

So there comes some optimizated solutions to alleviate this problem. Among them is Cilium.

Cilium is also a K8s-native solution, but solves the performance problem by utilizing a new kernel technology: eBPF. eBPF rules bases on hashing, so it has O(1) complexity. 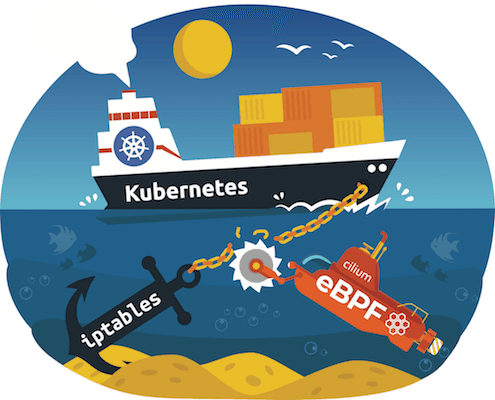 After several POC verifications, we decicded to adopt Cilium as our next generation networking solution. This is a 10-year leap for us in terms of networking stack. 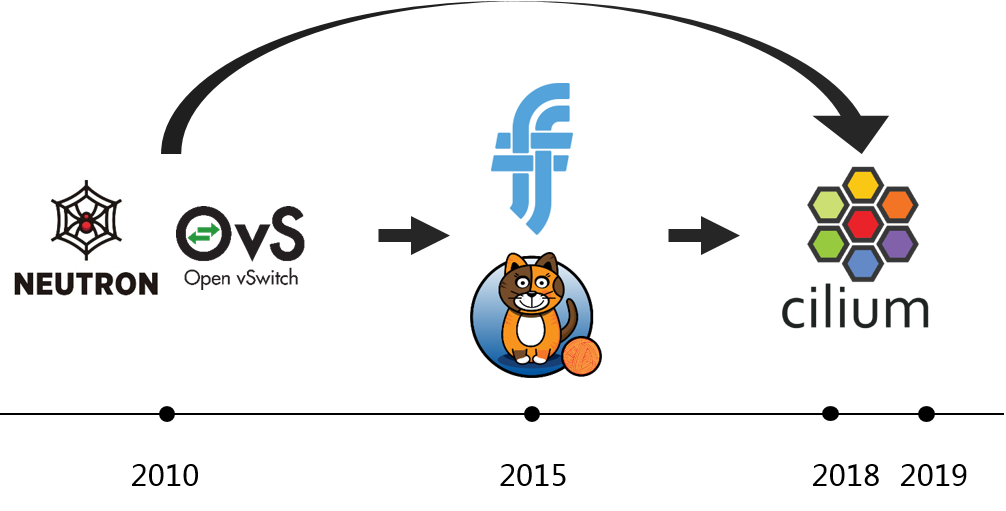 Based on massive research and real environment testings, we decided to adopt Cilium as our next generation networking plan. 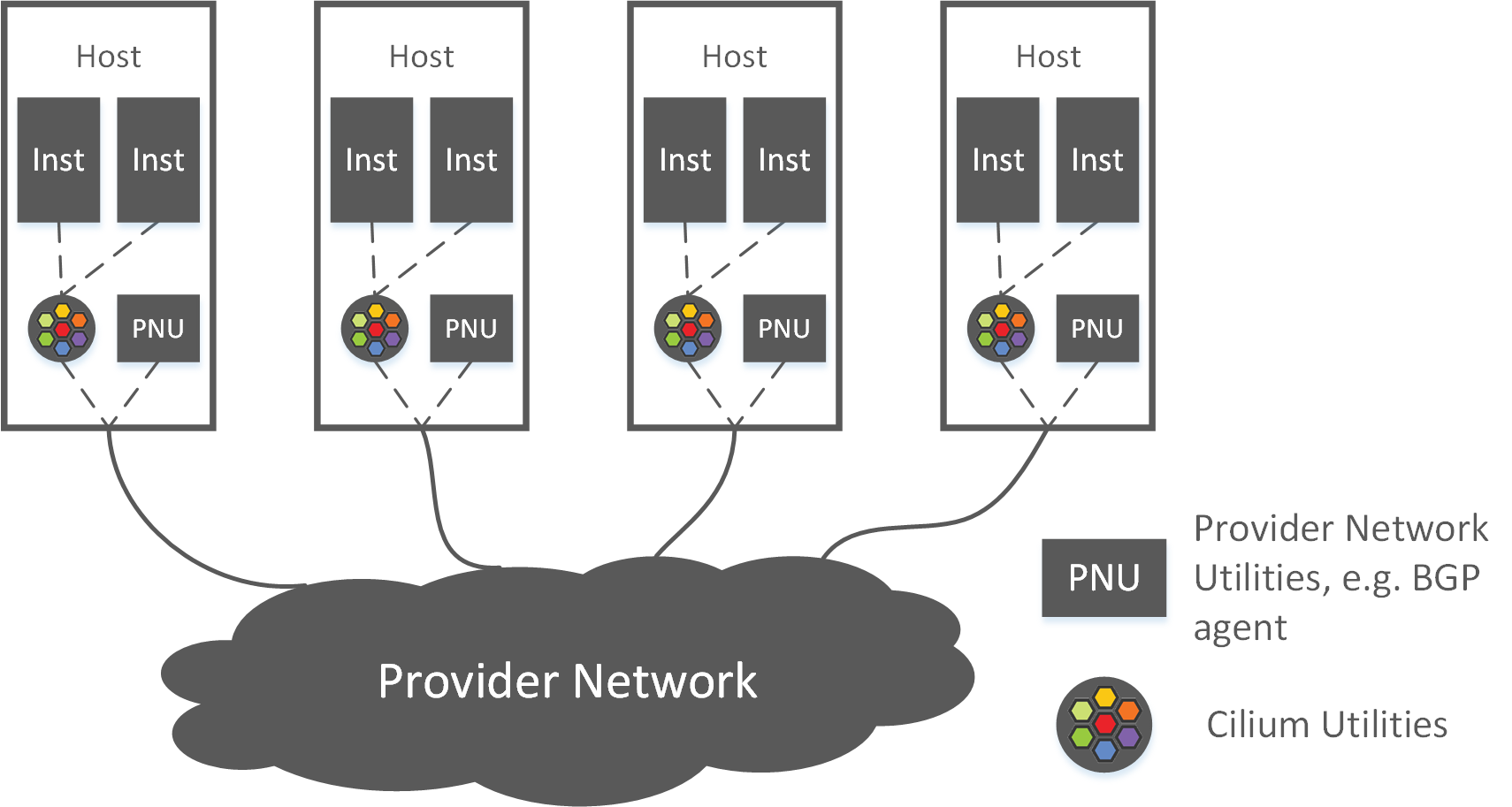 Benefits of this solution:

Hardly could a solution be rolled out into production environment without any changes/customizations, especially when you already have large clusters with critical businesses running on them for years. Thus we spent much time on identifying the couplings between our business and networking, try our best to make business users unaware of the underlying changes.

Besides, we also explored our own way for efficient deployment, upgrade and maintanance.

Below are some of our configurations/customizations that may differ from vanilla Cilium deployments.

We use BGP for inter-host communication, and choose Bird [2] (2.x version) as BGP agent.

Cilium official documentation recommends kube-router as BGP agent, while it is a nice agent for automatic bootstrap, it has limited functionalities compared with bird, e.g. BFD, ECMP, which are very important when considering advanced features and performance issues.

For metric collecting, we use bird_exporter [3], but we made some changes and built our own docker images, and use daemonset to deploy it. Besides, we also created our own moniotring dashboards and alertings.

On AWS, we deploy Cilium with ENI mode, but also with some customizations.

For example, Cilium agent will create a CiliumNode CRD on agent start, but the default configuration leaves the ENI spec (ENI field in struct NetConf) empty, which results the agent arbitrarily choose a subnetTag for creating ENI and pre-allocate IPs. This causes problems for us as some subnets are not meant to be used by Pod, e.g. the outbound subnet.

Luckily, Cilium provides a way to workaround this (but doesn’t provide detailed documentation :(, we walked through the source code and made things eventually work). Here is our workaround:

with these two steps, the agent will choose the correct subnets for ENI/IP allocating.

This fashion also allows us to permanently specify min-allocate/pre-allocate/etc parameters. In comparison, in the default settings, runtime values will be overwrite by default values when agent restart.

We added fixed IP funtionality (only for statefulset) for our special case - an intermediate step torwards true cloud-native for some applications.

This code is a little bit dirty, but it is loosely coupled with upstream code, so we could rebase to the newest upstream code with just git rebase <tag>.

But this feature currently relies on sticky scheduler, which is a simple k8s scheduler implemented by us internally (you could also find similar schedulers on github), so this feature is not ready to be widely used by other users.

Cilium officially recommends Grafana + Prometheus for monitoring and alerting, and provides yaml files to create those infrastructures. It’s easy to get started.

But we re-used our eixsting monitoring & alerting infrastructures, which is quick similar but internally optimized:

Besides, we created our own dashboards based on those metrics. Below lists some of them (resize your page to see them more clearly):

We setup independent etcd clusters for Cilium, which doesn’t rely on K8S.

Well, this differs a lot from the community.

We don’t want Cilium relies on K8s - at least currently. Cilium is an underlying service for K8s, not the opposite. (What’s more, we may even consider supporting OpenStack with Cilium - but don’t be suprised, we have’t decided yet).

So, we use docker-compose + salt for deployment, which doesn’t rely on K8S. This enables us to:

Another benefit of docker-compose over daemonset is that we can have distinct configurations at node-level for cilium-agent, while the latter uses configmap, which is limited to cluster-level.

What’s more, we intentionally made the docker-compose files compatible with upstream images - which means, for example, if a node doesn’t need fixed IP feature, we could just docker-compose up the cilium agent with community cilium images.

We added new cilium-powered nodes to our existing cluster, so there are actually two types of nodes working together:

We managed to let the Pods on these two types of nodes reachable to each other. One of our next plans is to migrate the Pods from legacy node to new Cilium node.

We have been stably running Cilium in our production environments for several months.

Now we have 6K+ pods on Cilium, which span over PROD and UAT/FAT, as well as on-premises and AWS.

Besides, we also have 10K+ GitlabCI jobs on Cilium each day, with each job launches a new Pod (and terminates it after job finishes).

This only accounts for a very small part of our total Pods, and in year 2020, we will start to migrate those legacy Pods to Cilium.